This is My Story

Hello! I’m Rike Pätzold and as Compass Coach I’m here to support you to tap your full potential and set course to a more successful career and meaningful live. I’ll also show you how to navigate transformation efficiently as well as effectively. As coach, facilitator, author and speaker I have extensive experience with all sorts of topics regarding change and transformation:

Transformation is the topic of our fast paced time – only those who keep up and continue to develop further have a chance to succeed. In order to go through transformation unscathed you need to be able to tolerate uncertainty and not be afraid of failing. 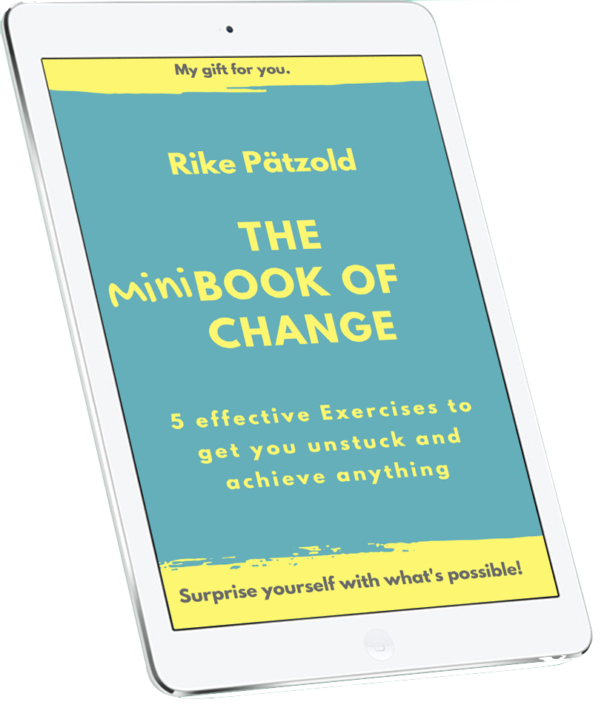 Are you a visionary?

Want to know how to stop being afraid of failure, thrive and live a life true to yourself?

How to live with uncertainty?

Then this book is for you!

Great! Let the book help you get started right away!

I hate spam as much as you do and I won't give your email address to anyone - sailor's honor!

Tolerance of Uncertainty is my thing. My pet issue so to speak.

I have always been the one who jumps. I have lived, studied and worked in six countries, not because I had to but because I chose to. With 15 I decided it was time to move to U.K. for a while, when I was 19 I was determined to spend time in Costa Rica so I did that. I love to immerse in new cultures and languages – to challenge myself with learning new systems and structures. When my son was 2, I organized a semester abroad in Taiwan for us and I after I graduated from university the both of us moved to Taiwan again, this time for two years – I wanted to gain work experience in a Chinese speaking environment.

A few years ago there was a new dream: Living on a sailboat longterm. My partner and I are in the middle of our professional careers but we didn’t want to wait another 25 years for freedom and flexibility and we wanted to spend time with our kids – now. So we bought an old sailboat, renovated it and sailed off into our big family sailing adventure! So that’s what I’m doing now, together with my family (there’s 4 of us, my partner has a son, too) – first in Greece, then in Italy, Morocco and now in Spain i.e. the Canary Islands.

I’m fluent in five languages and less fluent in four more. I’m constantly working on making my comfort zone bigger and bigger by doing things I thought I couldn’t do.

But how is that possible? Am I rich? Isn’t that all really difficult and risky? No, yes and no. No, I never had much money but I made up with determination. No, it wasn’t easy, I had many low moments, believe me. And risky? Well, I guess it depends what you feel you are risking. I always felt it was too big of a risk to NOT do all these things. Because that would have meant risking our vision. Our happiness. The kids’ education. Our chance to learn and grow.

Freedom means more to me than anything, chaos and uncertainty are my friends. And the sailing seemed like a perfect match.

I took my coaching business on board with me and restructured it so as a result it was compatible with our new life style – which by the way most said was impossible. I proved them wrong because: it worked! So Im I successful? Yes! Did you know that more people than ever are looking for ways to live a meaningful life? I support them in finding out what’s possible and how to combine living the life that they have always wanted and thrive professionally at the same time. And I help them get through transition and chaos and emerge thriving on the other side.

Unexpected situations are my everyday business and seeing solutions where others haven’t even started looking is my speciality. As a sailor you are depending on weather and wind: you need to be sensitive to changes, weigh your options and make the best of it – fast! And that’s exactly how I support my clients – they learn how to successfully „surf“ the waves of economy and how to think out of the box.

So what about you?

Do you allow yourself to live the life that you want?

Is your life meaningful?

Do you let yourself be really successful?

Do you tap your full potential (do you even know it?)?

If your reply is ‘no’ to any of the above questions and if you’d like to change that, contact me and I’ll support you in every way I can so you can live, love and lead more successfully – now.

Surprise yourself with what’s possible! How did I get from studying cultures to coaching leaders? I have always been interested and fascinated by Japan and China so it was a natural progression after finishing high school to pick Japanese and Chinese Studies as subjects in university. Linguistics, Philosophy and Culture were also topics that interested me so I decided to learn more about that, too:

The Chinese language isn’t something you can learn effectively without actually being on site so I moved to Taiwan twice to improve my language skills and also get some experience in working in a Chinese culture environment.

I financed my travels and stays abroad mainly through teaching German, Chinese and English – and since as early as 2006 online tutoring was already an option I took a course in Online Language Tutoring, learning how to employ various tools and devices (Webex, Lync, Skype etc.)

The turn to Coaching

During my time in Asia I realized that cultural barriers posed quite a problem in the business context. I wanted to understand more about that and additionally learn how to coach and support leaders. After my return to Germany I enrolled in an intense training program:

After successfully graduating from that program my appetite for further improving my coaching skills just grew bigger and bigger. Consequently I took a variety of courses and trainings to widen my coaching and facilitation spectrum, for example:

In 2012 I founded my own coaching, training and consulting business and I have been working with clientsfrom various industries and fields ever since! It is my mission to help others find ways to live, love and lead more successfully.

I have worked with a variety of clients from different industries and of various sizes – automotive, aviation, software and tech companies, SME and numerous educational providers. Having started off with coaching and training companies for success in China and East Asia I have since widened my spectrum to transformation and compass coaching. I also develop trainings, workshops and seminars that help leaders accelerate their professional and personal growth.